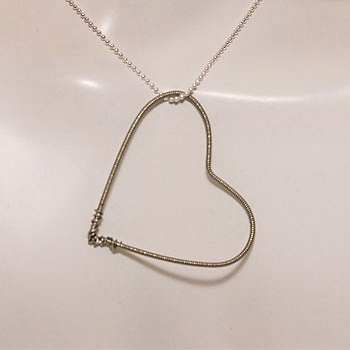 Grace Potter guitar string heart pendant
As noted in the description – Due to the high demand of the StringsforaCURE® jewelry, it will take approximately 6 – 8 weeks to complete. These are hand-made and may vary slightly.

A floating heart pendant made out of Grace Potter’s used/played guitar string by 2x breast cancer survivor Elisa Guida. Pendant is app. 1 1/4″ and comes with a 16, 18 or 20″ sterling silver chain (not a beaded chain as shown in picture). Thickness of string may vary. Due to the high demand of the StringsforaCURE® jewelry, it will take approximately 6 – 8 weeks to complete. These are hand-made and may vary slightly.