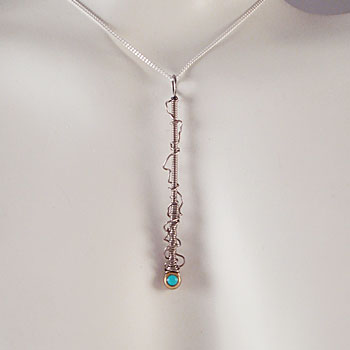 As noted in the description: Due to the high demand of the StringsforaCURE® jewelry, orders take approximately 6-8 weeks to complete.

Pendant made out of Chris Daughtry’s used/played silver colored guitar string with ferrule, by jeweler and 2x breast cancer survivor Elisa Guida.  Pendant is app. 2 ” and contains the ferrule from Chris’s string and set inside the ferrule is a 3mm turquoise round cabochon stone. Pendant comes with a 16, 18 or 20″ sterling silver chain.  Due to the high demand of the StringsforaCURE jewelry orders take approximately 6-8 weeks to complete. These are hand-made and may vary slightly.

Christopher Adam “Chris” Daughtry (born December 26, 1979) is an American musician best known as the lead vocalist and rhythm guitarist for the rock band Daughtry and as the fourth-placeChris Daughtry contestant on

the fifth season of American Idol, the competition that he was eliminated from on May 10, 2006. After his elimination from Idol, he was given a record deal by RCA Records and formed a band called Daughtry. Their self-titled debut album became the fastest selling debut rock album in Nielsen Soundscan history, selling more than one million copies after just five weeks of release. The album was recorded before the band was officially formed, making Chris Daughtry the only official member present on the album. In its ninth week of release, Daughtry reached number one on the Billboard charts. Chris Daughtry is now the third most successful American Idol contestant in terms of record sales, behind only Kelly Clarkson and Carrie Underwood, who both won their respective seasons. At the 50th Grammy Awards, the band was nominated for Best Rock Song for the single “It’s Not Over”. Since the band’s first album, Chris Daughtry has collaborated with several artists, including Slash, Sevendust, Theory of a Deadman, and Carlos Santana. He is known for his powerful vocal belting technique and wide vocal range.