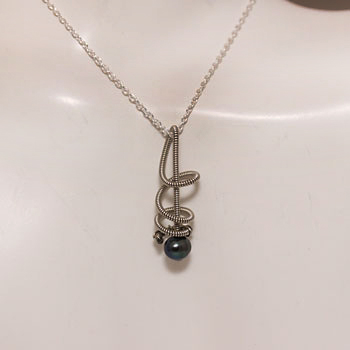 Please note in the description:
Due to the high demand of the StringsforaCURE® jewelry, it will take 6 – 8 weeks to complete your order. These are hand-made and may vary slightly.

One of a kind pearl necklace made out of Wynonna Judd’s used/played guitar string. Pendant is app. 1 1/2″ and contains a 5x6mm raven’s wing freshwater potato pearl. Comes with a 16, 18 or 20″ sterling silver chain. Due to the high demand of the StringsforaCURE® jewelry, it will take 6 – 8 weeks to complete your order. These are hand-made and may vary slightly.

Wynonna Ellen Judd, born Christina Claire Ciminella; May 30, 1964, is a multi award-winning American country music singer. She is one of America’s most widely recognized and awarded female country singers of the 1990s. Her solo albums and singles are all credited to the single name Wynonna. She first rose to fame in the 1980s alongside her mother Naomi in the country music duo the Judd’s. They released seven albums on Curb Records in addition to 26 singles, of which 14 were number-one hits.