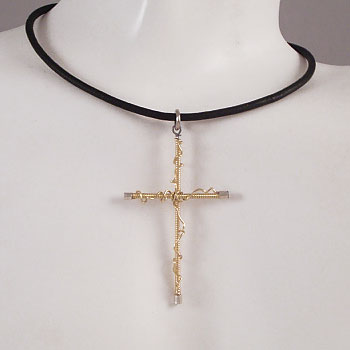 Ryan McGarvey Guitar String Cross made from Ryan’s used/played gold colored guitar string. Cross is designed by 2x breast cancer survivor Elisa Guida. Cross is app. 2 1/4″ L x 1 1/8″ W. Comes with a 16, 18, 20, 22 or 24 inch  finished leather chord with lobster clasp. Due to the high demand of the StringsforaCURE® jewelry, it will take approximately 6 – 8 weeks to complete. These are hand-made and may vary slightly.

Ryan McGarvey is a star on the rise. In just the past few years his accolades have included being selected by Eric Clapton from over 4,000+ artists worldwide to perform at his 2010 Crossroads Guitar Festival in Chicago, to the Guitar Player Magazine’s Annual Readers Choice Award for “Best New Talent” in 2013. 2014 proved to be another epic year for McGarvey as he voted the winner of “Best Guitarist” in the European Blues Awards. Ryan is constantly on tour internationally, and records whenever time permits. His incendiary, yet dynamic guitar playing leaves crowds around the world marveling, and wanting more. With strong songs, award winning vocals, fierce guitar playing, an unstoppable work ethic, and an undying love for the blues flavored hard rock he pours from his soul, Ryan has been compared to the best in the business. Ryan McGarvey, though already a seasoned professional, has a bright future ahead of him that has only just begun.

Catch him when you can! http://ryanmcgarvey.com/