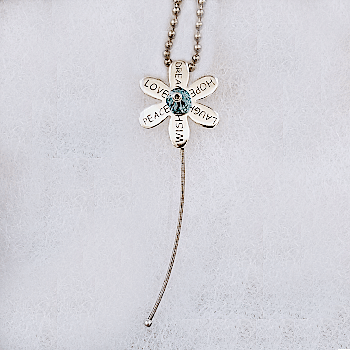 As noted in the description: Due to the high demand of the StringsforaCURE® jewelry, orders take 6-8 weeks to complete.

Guitar string pendant made out of Eliot Lewis’s donated/played silver colored guitar string. Jewelry is designed by 2x breast cancer survivor Elisa Guida, pendant is app. 2  1/8″ in length and contains a 5mm Aquamarine Swarovski crystal along with a sterling silver flower charm that says: Dream, Hope, Laugh, Wish, Peace, Love. Comes with a 16, 18, 20, 22 or 24″ beaded stainless steel chain. This piece is made to order and takes approximately 6-8 weeks to complete. These are hand-made and may vary slightly. If you would like a different crystal color send an email to: elisa@stringsforacure.org

Eliot Lewis has a career most musicians could only dream about.

A singer, songwriter and multi-instrumentalist, Eliot Lewis has toured all over the world as a member of the Daryl Hall & John Oates band, as well as a key member of the Scottish funk outfit, The Average White Band. Eliot has also been the only musician to appear on Daryl Hall’s incredibly popular, “Live From Daryl’s House” show all while keeping his own solo career going at a seemingly impossible pace.

“Eliot is a musician who can do it all, great singer, songwriter and guitarist. He rocks and he’s got soul. No one does it quite like him” – Daryl Hall

Having mastered four instruments over the course of his career; guitar, keyboard, bass and drums, Eliot’s shows will find him moving from one instrument to another, even playing several at once. If Eliot plays a cover song, it’s typically a song he’s performed with that artist.

Equally at home in front of 100 or 15,000, Eliot has performed on the worlds most legendary stages, including Madison Square Garden, Japan’s Budokan, Red Rocks, The Hollywood Bowl as well as Late Night with Jimmy Fallon, Conan O’Brien, The Today Show, Jimmy Kimmel Live and many others.

Eliot has carved out his own distinctive brand of rock & soul and has written, performed and produced all of his Cd’s including the brand new and first ever all instrumental “Sonic Soldier”

“Songs come from the inside out. I think my main goal is to convey these little slices of life. Most of my songs are written about my own experiences and situations.”

There are many who shaped Eliot’s music and writing. As a guitar player, definitely Jeff Beck who I’ve been listening to all my life, as well as Billy Gibbons who I had the great fortune of working with recently, and Peter Frampton who I actually jammed with when I was 14 yrs old. I had the amazing experience of meeting and seeing many influential artists when I was a kid mainly at Madison Square Garden in New York City. A place I just played with Hall & Oates which was a lifetime dream. One of the first writers to inspire me to write songs was Rick Nielsen of Cheap Trick, another favorite band of mine that I just worked with on Live From Daryl’s House.