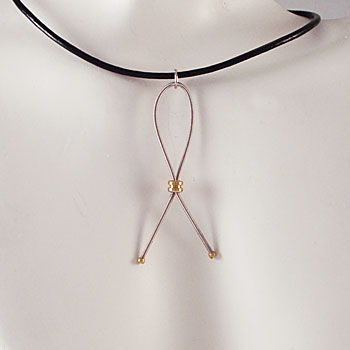 Please note in the description: Due to the high demand of the StringsforaCURE Jewelry, orders take 6 – 8 weeks to complete.

Awareness ribbon pendant made out of Todd Rundgren’s used/played guitar strings, by jeweler and 2x breast cancer survivor Elisa Guida.  Pendant is app. 2″ in length and comes with a 16, 18, 20, 22 or 24″ finished leather chord with lobster clasp.  Due to the high demand of the StringsforaCURE® jewelry, it will take approximately 6-8 weeks to complete. These are one-of-a-kind and may vary slightly. Please click into the Musician’s Release Form, to view our Certificate of Authenticity.

the early stages of his career for both his own material and for his production of other artists, supported by the certified gold solo double album Something/Anything? in 1972, his career has produced a diverse and eclectic range of recordings often both as a solo artist and as a member of the band Utopia. Rundgren has often been at the forefront as a promoter of cutting edge recording technologies.

His best-known songs include the 1972 singles “Hello It’s Me” and “I Saw the Light”, which have heavy rotation on classic rock radio stations, and the 1983 single “Bang the Drum All Day”, which is featured in many sports arenas, commercials and movie trailers. Although lesser known, “Couldn’t I Just Tell You” has had a major influence on artists in the power pop musical genre.