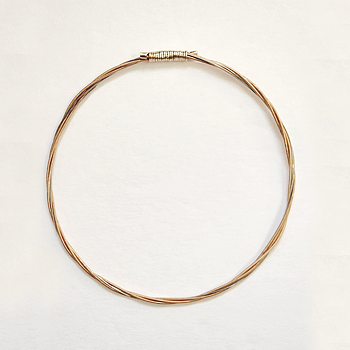 One-of-a-kind bracelet made out of Melissa Etheridge’s used/played silver or gold colored guitar string. Elisa Guida, a jeweler by trade, and 2x breast cancer survivor, will design a bangle bracelet just for you.  Once you place your order, you will receive an email with steps on how to measure you hand. Your wrist measurement will also be required, so that the bracelet will fit you properly.  Due to the high demand of the StringsforaCURE® jewelry, orders take approximately 6-8 weeks to complete.  These are hand made and will vary slightly and string thickness will also vary.

Etheridge, who continued to churn out studio albums, including the 2004 recording Lucky, found her life derailed when she was diagnosed with breast cancer. Etheridge would go on to make a full recovery, but just like so much else in her life, she wasn’t afraid to expose her illness or the struggles that came with it as she fought the disease. Read more at: https://www.melissaetheridge.com/