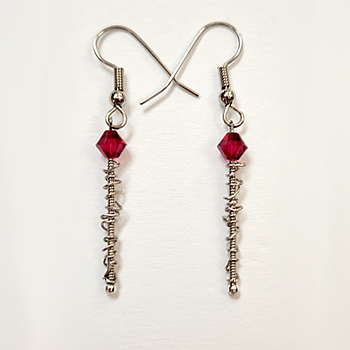 Earrings made out of Joe Bonamassa’s used/played silver colored guitar strings. Earrings are designed by Elisa Guida, a 2x breast cancer survivor.  Using approximately 1 & 1/2″ of Joe’s strings and a 5mm Ruby Swarovski crystal per earring, earrings are app. 2″ total length which includes the surgical steel French ear wires. Due to the high demand of the StringsforaCURE® jewelry, it will take approximately 6-8 weeks to complete. These are hand-made and may vary slightly. If you would like a different colored crystal, email elisa@stringsforacure.org

Please click into the Musician’s Release Form, to view our Certificate of Authenticity.