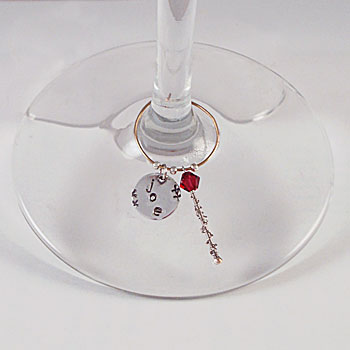 Joe Bonamassa Guitar String Wine Glass Charm. For the Joe Bonamassa fan who likes to sip wine. This is for you and your wine glass. Using app. 1″ of Joe’s used/played guitar string and contains a 5 mm ruby red Swarovski crystal and a handmade stamping that says Joe, this really cool wine glass charm will be the hit at your next party. Each charm is handmade and may vary slightly. Due to the high demand of the StringsforaCURE® jewelry, it will take approximately 6 – 8 weeks to complete. Wine glass not included. If you would like a different colored Swarovski crystal email: elisa@stringsforacure.org

As Joe Bonamassa grows his reputation as one of the  world’s greatest guitar players, he is also evolving into a  charismatic blues-rock star and singer-songwriter of  stylistic depth and emotional resonance. His ability to  connect with live concert audiences is transformational,  and his new album, Black Rock, brings that energy to his  recorded music more powerfully than ever before. The  tenth solo album and eighth studio release of his career –  as well as his fifth consecutive with producer Kevin Shirley  (Led Zeppelin, Black Crowes, etc.) – the disc adds an enlivening dose of ‘world’ vibes to Bonamassa’s virtuoso mix of ‘60s-era British blues-rock (à la Beck and Clapton) and roots-influenced Delta sounds.