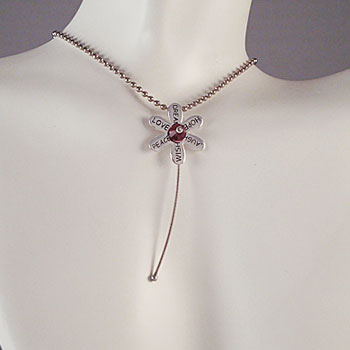 Grace Potter guitar string flower pendant
As noted in the description – Due to the high demand of the StringsforaCURE® jewelry, it will take approximately 6 – 8 weeks to complete. These are hand-made and may vary slightly.

Grace Potter’s guitar string flower pendant is made out of Grace’s played/recycled gold colored guitar string. Pendant is designed by 2x breast cancer survivor Elisa Guida. Pendant is app. 2 1/4″ and contains a 5mm Amethyst Swarovski crystal along with a sterling silver flower charm that says: Dream, Hope, Laugh, Wish, Peace, Love.  Comes with a 16, 18, 20, 22 or 24″ stainless beaded chain. Due to the high demand of the StringsforaCURE® jewelry, it will take approximately 6 – 8 weeks to complete. These are hand-made and may vary slightly. If you would like a different crystal color send an email to: elisa@stringsforacure.org