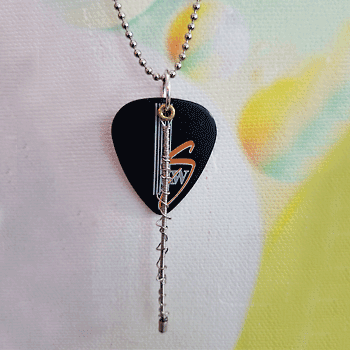 Please note in the description: Due to the high demand of the StringsforaCURE® jewelry each order takes approximately 6-8 weeks to complete.

Kenny Wayne Shepherd guitar string and pick pendant made from Kenny’s used/played strings and donated guitar pick. The KWS pick will not be the same one that is in the picture, we have a few different KWS picks that Elisa is picking from. Designed by 2x breast cancer survivor Elisa Guida. Pendant is approximately 2 1/2″ and includes a sterling silver “O” ring. Comes with a 16, 18, 20, 22 or 24″ stainless beaded chain.  Back of guitar pick has Kenny’s printed signature. Due to the high demand of the StringsforaCURE® jewelry each order takes approximately 6-8 weeks to complete. These are hand-made and may vary slightly.

There are few artists whose names are synonymous with one instrument and how it’s played in service to an entire genre.”