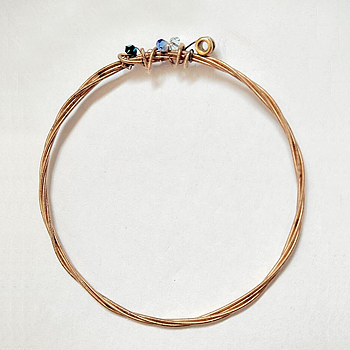 Let Elisa design a one-of-a-kind bracelet made out of Sam Hyman’s used/played GOLD colored guitar string. Elisa Guida, a jeweler by trade, and 2x breast cancer survivor, will design a bangle bracelet just for you.  Once you place your order, you will receive an email with steps on how to measure you hand. Your wrist measurement will also be required, so that the bracelet will fit you properly.  The bracelet will include some crystals. Due to the high demand of the StringsforaCURE® jewelry, orders take approximately 6-8 weeks to complete.  These are hand made and will vary slightly and string thickness will also vary.

Sam is a world class musician, vocalist, and composer whose original songs and themes have been distributed worldwide by the Warner Music Group and numerous independent labels and stock music agencies. Sam has captivated thousands of audiences with his unique guitar style, soulful voice, and his new interpretations of timeless classics. As a writer with Northstar Music UK, Sam’s music has been featured in television and theater productions around the world.
In 2001, Sam reached his first international audience when “Fly,” a song penned by Sam and Dante Thomas, was debuted as the title cut of Dante’s freshman Elektra Records release.   The track was produced by Pras (The Fugees, “Ghetto Supastar” with Mya) and has achieved gold status in several countries.  This track along with many of Sam’s original titles continues to be featured in film, television and radio the world over.
In 2014, producers of the famed American soap, “The Young and The Restless” chose Sam’s original ballad, “You’re in My Heart” to theme an episode which aired in January of that year. This beautiful song was originally written and recorded by Sam for his children and fit perfectly with the touching story of a father’s love for his young daughter.
Today, Sam continues to write and record original music, he has an extremely busy live performance schedule, and he’s just released his fourth record, “Place to Be”.