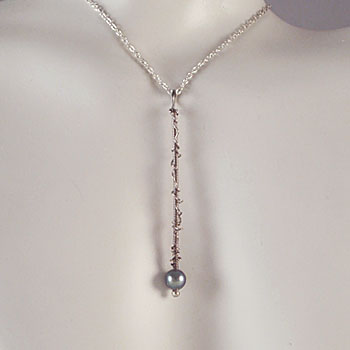 As noted in the description: Due to the high demand of the StringsforaCURE® jewelry,  orders take approximately 6-8 weeks to complete.

Pendant made out of Rick Springfield’s used/played guitar strings, by jeweler and 2x breast cancer survivor Elisa Guida.   Pendant is app. 2 1/8″ and contains a 6mm grey freshwater pearl.  Due to the high demand of the StringsforaCURE® jewelry orders take approximately 6-8 weeks to complete. Pendant comes with a 16, 18 or 20″ sterling silver chain. These are hand-made and may vary slightly.

Springthorpe, on August 23, 1949, in Sydney, Australia. The son of an Australian army officer, Springfield frequently moved throughout his childhood, living in both Australia and England. While in high school, he developed an affinity for music, began playing the guitar, and formed a band called the Jordy Boys. He went on to perform with the groups Rock House and Zoot before launching a solo singing career with the 1971 Australian hit “Speak to the Sky. “After an auspicious solo debut in Australia, Springfield was signed by the American-based label Capitol Records. In 1972, he moved to Los Angeles and released the album Beginnings. Featuring many of his previous Australian hits, including a new version of “Speak to the Sky,” the album fared well on the charts. To Springfield’s dismay, critics immediately labeled him the next teen pop idol. In 1973, in an attempt to shed his bubble gum image, Springfield moved to Columbia Records, where he recorded the disappointing LP Comic Book Heroes.

In the mid-1970s, Springfield temporarily shelved his music career and concentrated on acting, appearing on several popular television programs like The Rockford Files, Wonder Woman, The Incredible Hulk, and The Six-Million Dollar Man. In 1980, he managed to secure a recording contract with RCA. While recording with the label, Springfield was cast as the dashing Dr. Noah Drake on the popular daytime drama General Hospital. As his popularity skyrocketed among soap opera fans, Springfield released the album Working Class Dog??s, which yielded the now-classic singles “I’ve Done Everything For You” and “Jessie’s Girl.” The latter song earned him a Grammy Award and became known as an anthem of the 1980s’ a time when his feathered hair, tightly suited body, and boyish face became hallmarks of the era.

Springfield has a huge fan base and continues to tour!