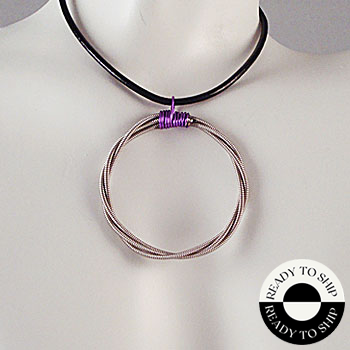 This piece is already made and READY TO SHIP!  This piece will leave my studio within 5 – 7 days of when you place your order.

ON SALE! This piece is already made and READY TO SHIP! Mick Jones of Foreigner, one-of-a-kind pendant made out of Mick’s used/played string. Designed by jeweler and 2x breast cancer survivor Elisa Guida. Pendant is app. 1  1/2″ in diameter.  The bail is made out of purple wrapped wire. Comes with a 16, 18, 20, 22 or 24″ finished leather chord with lobster clasp. Email elisa@stringsforacure.org if you would like a stainless-steel beaded chain instead. This piece will leave my studio within 5 – 7 days of when you place your order.

The architect behind Foreigner’s extraordinary catalogue of smash hits, Mick has crafted some of rock music’s most enduring songs and produced 10 multi-platinum albums. Grammy and Golden Globe nominated songwriter, performer and producer and winner of the prestigious Ivor Novello songwriter award in Britain in 1998, Mick first began playing guitar in his early teens. “I knew early on that I could never hold a regular job. I had to play guitar. I had to somehow make my way into music” he says.

After starting his own Blues/Rock band and opening for the Rolling Stones in pubs across South London, Mick’s first big break came in 1964 when he moved to Paris and was hired to play with French singer Sylvie Vartan and later hired to work as musical director for French rock icon, Johnny Hallyday. Jones returned to his native England in the early 70’s to reform the band Spooky Tooth with Gary Wright. After Spooky Tooth broke up, Mick moved to New York City and, in 1976, formed Foreigner with fellow Brits Ian Mc Donald and Dennis Elliott, and Americans Lou Gramm, Alan Greenwood and Ed Gagliardi.

In his own words:

“My initial musical vision for Foreigner was to combine Blues and R&B with British Rock and make it sound soulful and authentic. I?d grown up in England and had the English influence but I was also inspired by many elements of American music, from Mississippi Blues to Country and Western. Foreigner was the vehicle to get that musical blend across.”

“I’m grateful to be surrounded by the talented musicians that make up Foreigner today. Now each night on stage brings Foreigner’s music alive with energy and excitement. Thanks guys for making it all new again!”

Quotes from Mick talking about Foreigner and the new “Feels Like The First Time” 3-Disc Album:

“When doing the ‘Hot Blooded’ solo I did my damnedest to set the amp on fire, which is what originally happened,” Mick says laughing, “I turned it up to 11, I kicked it. . . ”

“My feeling over the years is that if you can write a song on an acoustic instrument, and it sounds good, you know you have a good song,” Mick explains. “The first time we approached these songs this way I was flabbergasted about how well they adapted back to their nucleus. It’s been an eye opener how stripping the songs bare brings fresh meaning and emotion out of them. The reaction has been so strong that it made me rethink the whole thing and put more attention to the unplugged show. People feel the intimacy, I talk about the songs and how they came about.”

“Its’ been 6 years since the new line-up has been in place. The success, for me, merited giving the public studio recordings of songs by the new band,” Mick Jones asserts. “People know the new Foreigner, so the Foreigner they see live is the same Foreigner they can get on record.”