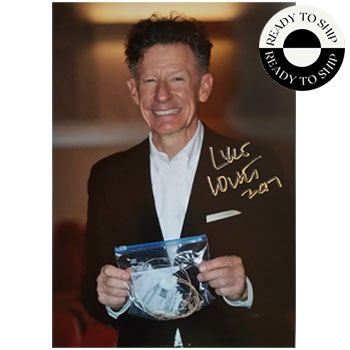 Photo and string are ready to ship and will leave my studio in 5 – 7 days of when you place your order.

When Lyle Lovett donated another set of his used/played strings in 2017, he autographed photos for StringsforaCURE®.  When you receive this autographed picture of Lyle, you will also receive a 2 inch piece of his gold colored guitar string. Photo is on an 8 1/2″ x 11″ photo paper. Photo and string are ready to ship and will leave my studio in 5 – 7 days of when you place your order.

Lyle Lovett was one of the most distinctive and original singer/songwriters to emerge during the ’80s. Though he was initially labeled as a country singer, the tag never quite fit him. Lovett had more in common with ’70s singer/songwriters like Guy Clark, Jesse Winchester, Randy Newman, and Townes Van Zandt, combining a talent for incisive, witty lyrical detail with an eclectic array of music, ranging from country and folk to big-band swing and traditional pop. Lovett‘s literate, multi-layered songs stood out among the formulaic Nashville hit singles of the late ’80s as well as the new traditionalists who were beginning to take over country music. Drawing from alternative country and rock fans, Lovett quickly built up a cult following which began to spill over into the mainstream with his second album, 1988’s Pontiac. Following Pontiac, his country audience declined, but his reputation as a songwriter and musician continued to grow, and he sustained a dedicated cult following throughout the ’90s.Born in Klein, Texas — a small town named after his great-grandfather, a Bavarian weaver called Adam Klein, which later became a Houston suburb — Lovett was raised on his family horse ranch. He didn’t begin his musical career until he began writing songs while he attended Texas A&M University in the late ’70s, where he studied journalism and German. While he was a student, he performed covers and original songs at local folk festivals and clubs. As a graduate student, he traveled to Germany to study and continued to write and play while he was in Europe. However, he didn’t begin to pursue a musical career in earnest until he returned to America in the early ’80s. Click here to visit Lyle Lovett’s web page.