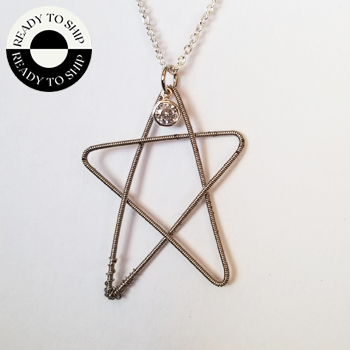 ON SALE! Only ONE Star/CZ Pendant is already made and READY TO SHIP! Please read Description for details on the pendant.

ON SALE! Only ONE Star/CZ Pendant is already made and READY TO SHIP!  One-of-a-kind Floating Star Pendant made out of Grace Potter’s used/played guitar string.  Jewelry is designed by 2x breast cancer survivor Elisa Guida.  Pendant is approximately 1 1/2″ L X 1″ W and contains a 4 mm cubic zirconia set in a sterling silver bezel and is movable. Comes with a 16, 18 or 20″ sterling silver chain. Pendant will leave my studio within 5 – 7 days of when you place your order.